(Yes, I have 22 other stories I have promised myself I’d write, but I have finally gotten to a place conducive to writing).

Right now, when I say War in Ukraine, you think of a very bloody and awful full scale conventional war. Your mind conjures up images of increasing brutality and even recently, hints of possible war crimes. Homes smashed by banned weapons, people displaced from their loved ones, lives ripped to tatters, fear, famine, death. All of this is correct, and it is happening now.

So, do you need a good news story? A balance? Something that lets you know there is not just the barbarism you see on TV or online, but there might actually might s

till be some humanity crawling amid the rubble.

Well, there is. But it still will move you to tears.

This is Andrzej Derenowski. He and Igor Tracz, the famous Polish mountain biker, have teamed up to rescue dogs and people (kind of in that order) from Ukraine. There are a lot of organizations rescuing people. I’ve come across none that have made room for dogs. Or any other pets for that matter. Igor and Andrzej, however, have done just that.

Check out the videos and pictures enclosed. The concept is basic. Igor is top athlete and dog sled racer. He owns a full suite of transport trailers, has a small team of friends and mountain biker supporters and whole hell of a lot of guts. He had a bold idea: galvanize his network of fans and supporters, run supplies in to Ukraine cram packed in his small fleet of trucks and trailers and come out with any and all dogs, and humans, they can rescue.

I interviewed Andrzej directly after he returned from Kharkiv and Kyiv with a load of live cargo. To say he was smoked is an understatement. The infrastructure in the places he’s been is gone, no water, no food, no gas. He traveled roads pockmarked and still under the menace of Russian artillery blasts. He’s been in towns that are merely rubble. Stalingrad in our time. He’s witnessed the death and carnage up close and personal. Yesterday.

I caught up with him haranguing the Polish border guards about their strict adherence to procedures. Funny thing, rather than cuff him, stuff him and cart him off for agitating, they instead just stood there, allowing him to berate them, their eyes wide. I met these cops, interviewed them. Tough dudes and no pussycats. But when bureaucracy meets benevolence, it appeared to me that humanity wins. At least in a country as understanding and willing to help as the unforgetting Poles. It’s happening next door. Inside, they all know what this war means. Because this was them just 40-years ago under the blows of the hammer and sickle and 40-years before that, under the steel-toed heel of the German boot. Yes, Poland remembers, and now they are standing up to Putin. Not necessarily with guns, but with their guts.

It took more than 36-hours for Andrzej to transit back to Poland after his collection and rescues were complete. That’s just one way. On this run, he’s rescued six dogs and one human. “Zip-Code” the Doberman Pincer, is the dog you see in this video. “Julia” is the fluffy, light brown Eurasier and “Yulie” is a German Shephard. See the videos and try not to cry. I dare you. When “Zip-Code” whines, it’s not because he’s hungry, thirsty or scared. It’s because he longs for human contact. Every time Andrzej pets him he calms down, satisfied that someone on two legs cares. 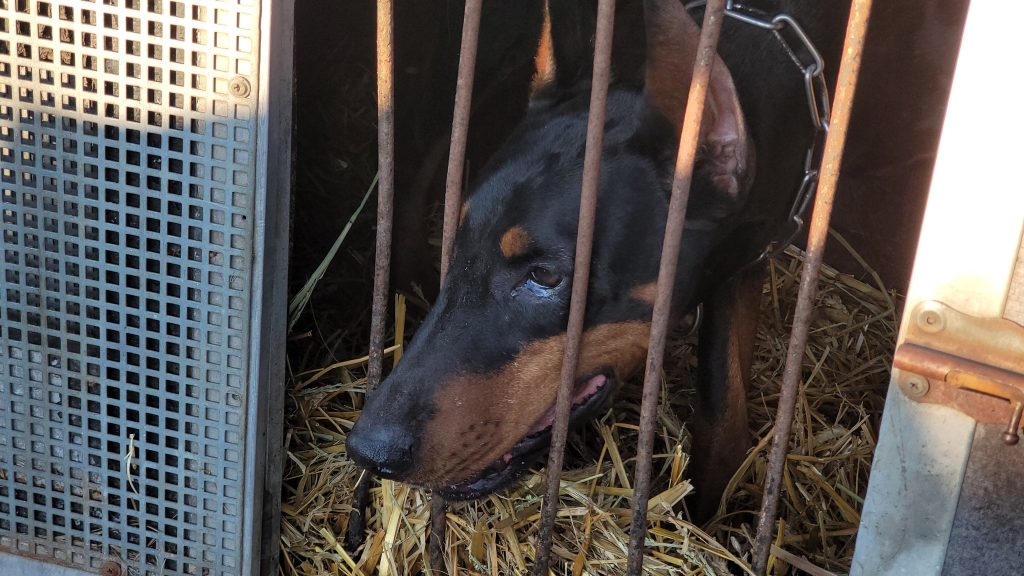 Not moved yet? Well here’s the saddest part; Zip-Code’s master and in fact most of the dog’s masters, have perished in the fighting. Some of the dogs were found wandering the street. Some absolutely refused to leave the wreckage of their homes, their human companions still inside. Igor and Andrzej have their hands completely full.

You can see it in Andrzej’s face and demeanor. 36-hours ago he was picking through the rubble and today he is in the relative safety of Poland with a load of dogs and one woman. In her video, her expression mirrors that of her pups. What’s her name, and what is the name of her little guys? Don’t know. Does it matter? Like many, they really don’t want to be identified and I have a hard time even reporting on her misery. It’s just important just to know her story, like thousands and in fact millions of others.

So, what’s the good news? The good news, like so many other wars, is that there are survivors. The dogs will all go to Igor’s farm. A spot that used to be a top location to prepare and condition himself and his dogs for his sport. Now he completely thrown open the doors. Foregone any further training and is awash with refugee dogs. He is using only his own resources. Igor and Andrzej, like many many other volunteers with whom I’ve spoken, just had to do something, anything. There are many aid organizations working with people, Igor and his followers saw a small need, a niche, and they filled it in the only way they knew how.

Question: “How long will you do this?”

Andrzej: “Until we can’t do it because the cities are closed off by battle.”

Wow! Just… wow! Do we say thanks? Shake his hand? Play with the puppies for a bit? Maybe, we just take hope that all over Europe, people like Igor and Andrzej are doing the things we only dreamed might have to one day be done.

Author’s notes: Thanks for reading my War Zone Diaries. If you want to contribute directly to Igor, please do so. My own estimation, but the price of dog food and humanitarian supplies alone will bankrupt them in the next few months.  Here is his website with his PayPal: [email protected]

by the way, the bumper sticker says: “Ratujemy Ludzi I psy z ukrainy” with a Ukrainian flag. That translates to “We save people and dogs from Ukraine.”