So this is pretty bad ass. Read on if you like to hear about studs doing tough stuff to help fight the war in Ukraine. 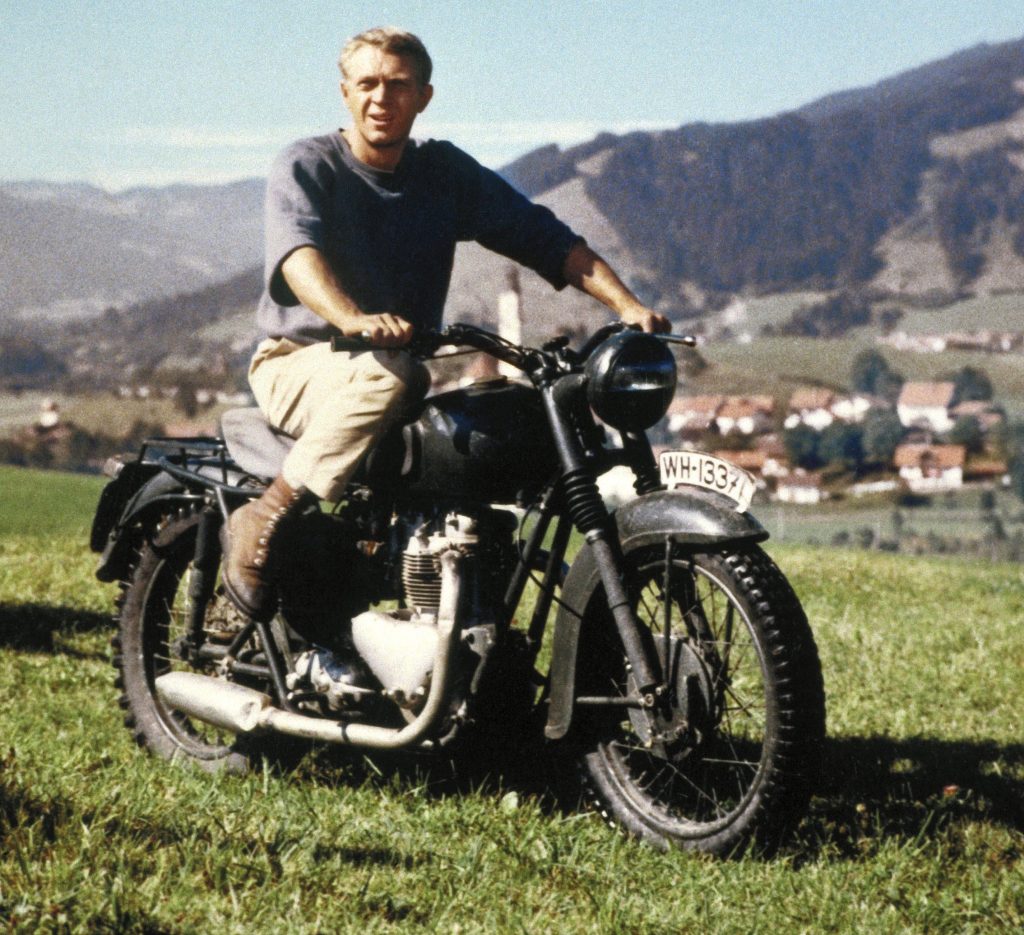 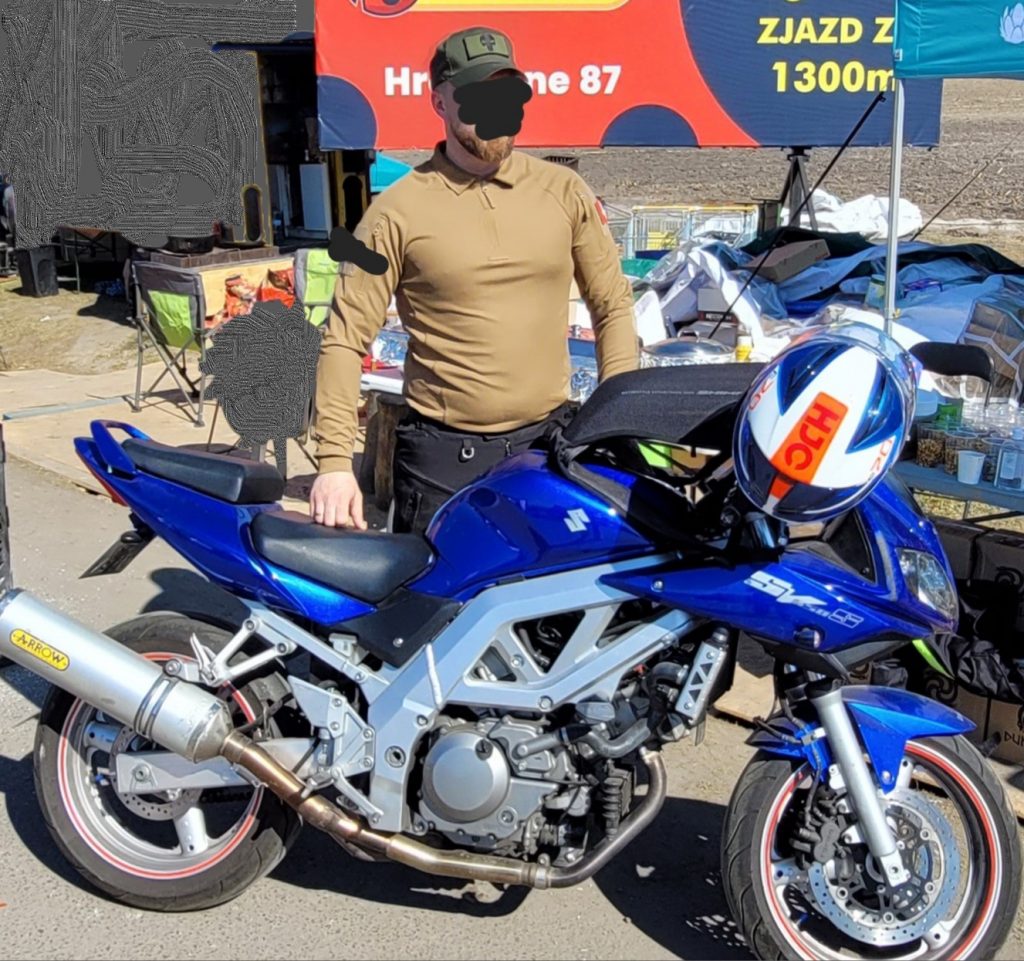 Motorcycles and war go together like gun-grease and Bullitts – just ask Steve McQueen.

I have owned motorcycles since I was 15-1/2 and used motorcycles extensively during my service in the Marine Corps. Most militaries do. Though it may seem anachronistic, you can immediately understand the advantages: speed, stealth and maneuverability. There are very few armies who would waste a heavy munition, like an anti-tank round, on a motorcycle. A helicopter can track a motorcycle but it’s hard to engage, and most infantry are not prepared for the speed in which a motorcycle shows up on the battlefield and then disappears in a cloud of dust.

Their uses are many: bringing in of critical supplies at crucial points in a battle; delivery of timely overlays and dispatches, issuing orders to troops otherwise cut off; emergency evacuation of a semi-ambulatory casualty; or nab some high-value piece off the battlefield when things get too hot; think – the enemy General’s captured laptop that is only valid for a few hours and needs to get back to the intel guys. Or just strap on a handful of NLAW anti-tank missiles and speed them to that unit who just spotted Russian armor advancing on their battlespace. They are amazing in urban warfare setting, like the Ukraine of today. Yeah, motorcycles and combat go together like horses and cavalry charges.

So, here’s the story: I caught up with this stud dude who races dirt bikes (see face blurred picture). He was standing next to a load of bikes tied to a trailer and was about to cross the border. I asked if I could chat with him and hear what he was up to. Probably not self-explanatory, but there is a LOT of traffic here at the border into Ukraine and a lot of legal, and illegal shit is passing by on a minute-by-minute basis. I have a separate diary entry on this you may be interested in. The nexuses in this war funnel some very unusual types through. At least enough to drive plots and keep me writing books for years to come. Some of it, by the way, is just too hot to publish. This one was right on the line though, and it is such a great story. So, I did my journalistic best to nail it down for you. 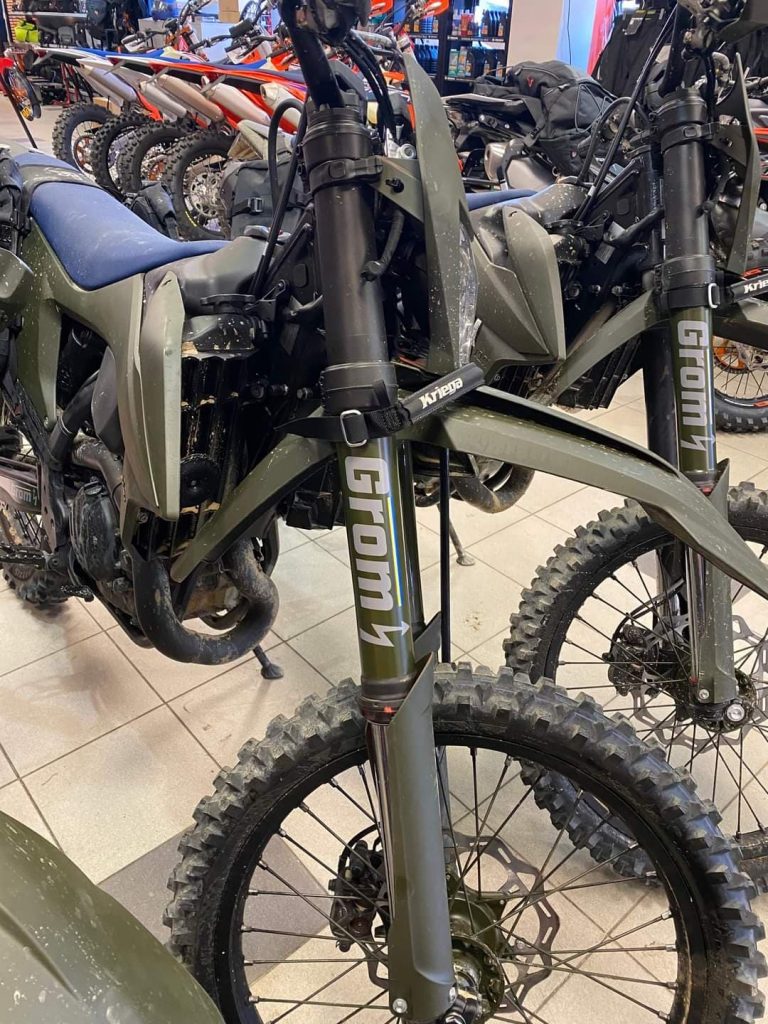 At first, he was really reluctant to do any kind of interview. I went with the ‘former military guy pitch.’ I have zero reason to endanger his operation and in fact as a military man, I understood immediately what the bikes could be used for. Besides, I think it’s really cool.

He was never in the military and didn’t even really have an affinity for the military profession. Just a respect for the fact that there was now a huge war in Ukraine and as a dudes dude, he wanted to be involved. This guy was switched on and ready to go, a real action kind of guy.

Motocross, as we’ll call him, spoke with a heavy Northern European accented English. It carried a jocular attitude to it. He has been on the racing circuit a while, and it shows. He spoke English colored with biker terms and lingo. Looking like a character from the TV show Vikings. Blonde, but trimmed beard, blue eyes and a swagger to his walk. I got the image that on the racetrack there were girls, a lot of girls, that hung around just to watch him and his buddies perform daredevil stunts and jumps.

I switched to the motorcycle rider brotherhood thing. If you don’t ride, you might not know what I’m talking about, but almost as tight as the bonds that hold military guys together long after combat is over, there is also a big respect factor among fellow biker enthusiasts. I showed him pics of my own motorcycle, a Yamaha Royal Star and asked him about his Suzuki SV650V.

“Ya, it’s not my favorite ride. My brother has a shop and I ride the used bikes that come in.”

Most dirt- and street-bikers look down at cruiser-drivers, but pix of my tricked-out pig back at home seemed sufficient to loosen him up some more. He was, afterall, talking to another iron jockey. Maybe not a racer, but aging Harley and cruiser guys still get some respect as ‘old school cool’ with the younger motorcycle set. I asked more questions about his gear and what he was up to. 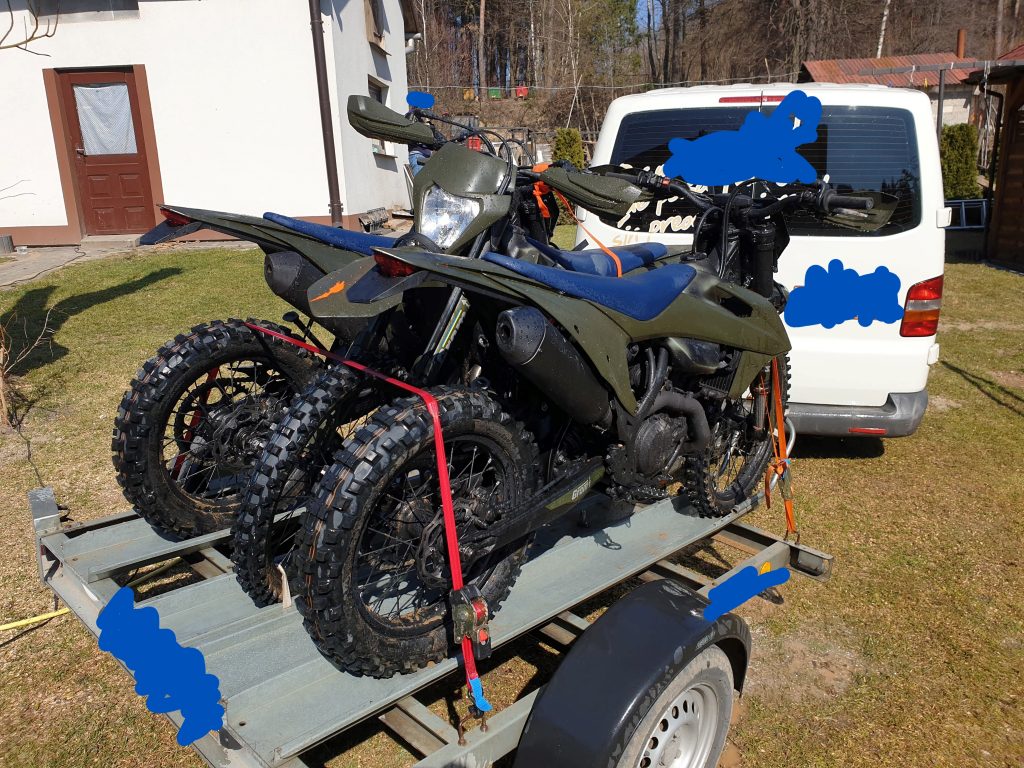 “Okay, you understand that this is kinda not above board, man. We’re not exactly working through, um, channels or, like import, export licenses or even tariffs.” said Motocross. At least now I was getting somewhere. “But as a motorcycle guy, you get that this is a needed thing in combat, right?” he said.
“Totally do. No problem. Let me talk to you for a bit and take some pictures. I can cut everything out that IDs you until you tell me it’s okay.” I said.

Motocross was understandably still reluctant, glancing at my yellow press patch a bunch of times. This was the first time, before I ran into Sean Penn three times in Warsaw, that I wished I’d ripped the thing off before I had approached someone to conduct an interview. Of course a motorcycle smuggler doesn’t want to be ID’d or even be on the record. Maybe a different approach.
“Okay, how about this, you take the pictures and send them to me when you’ve finished your next run. I won’t put anything online till then.” I said. 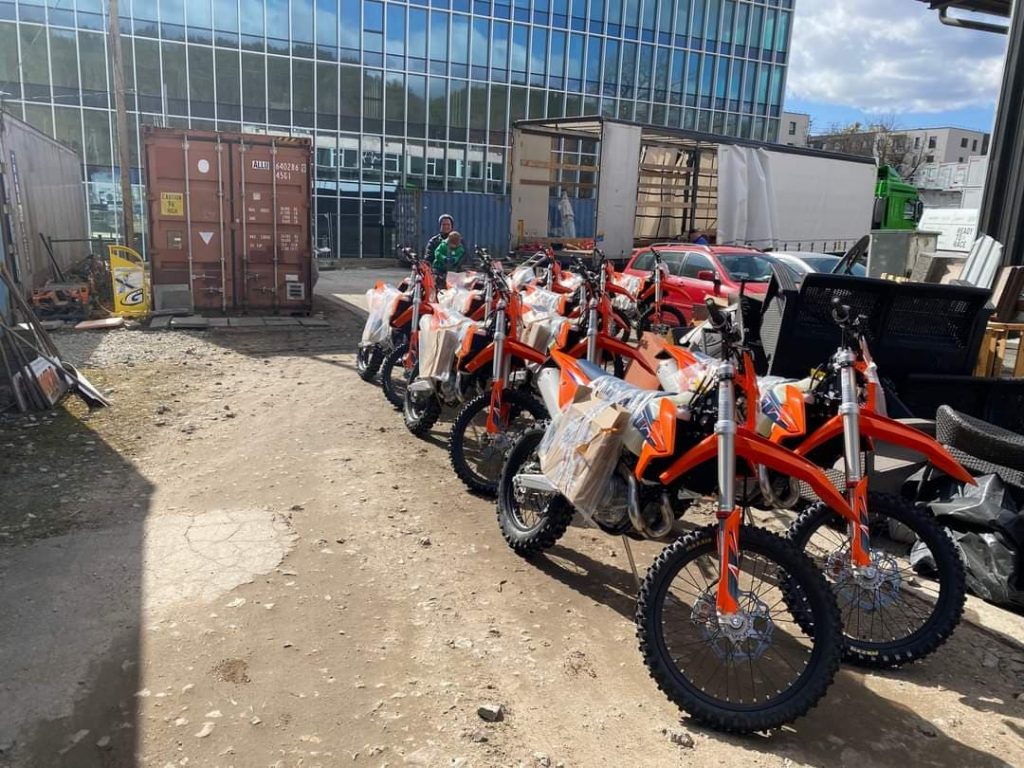 Me: “How did you come up with this idea?”
Motocross: “Hey bro, I was watching the war when it started, and I have a lot of friends in Ukraine. I thought maybe I needed to enlist and go help out. Then I decided, better idea, I ride and my brother owns a dirt bike repair and upgrade shop. I’m going to see if I can get some cash, buy a bunch of dirt bikes and give them to the Ukrainian army. Better use of my time and resources and instead of just another gun-toter, they get something better.” His truck was parked nearby, completely marked and obvious. Racing logo and sponsorships painted all over the outside. He was and is hiding in plain sight.

Me: “So how’s it work?”
Motocross: “We buy dirt bikes, a lot of them. We take off all the faring and change them over. We work on them so they’re running in top order.” 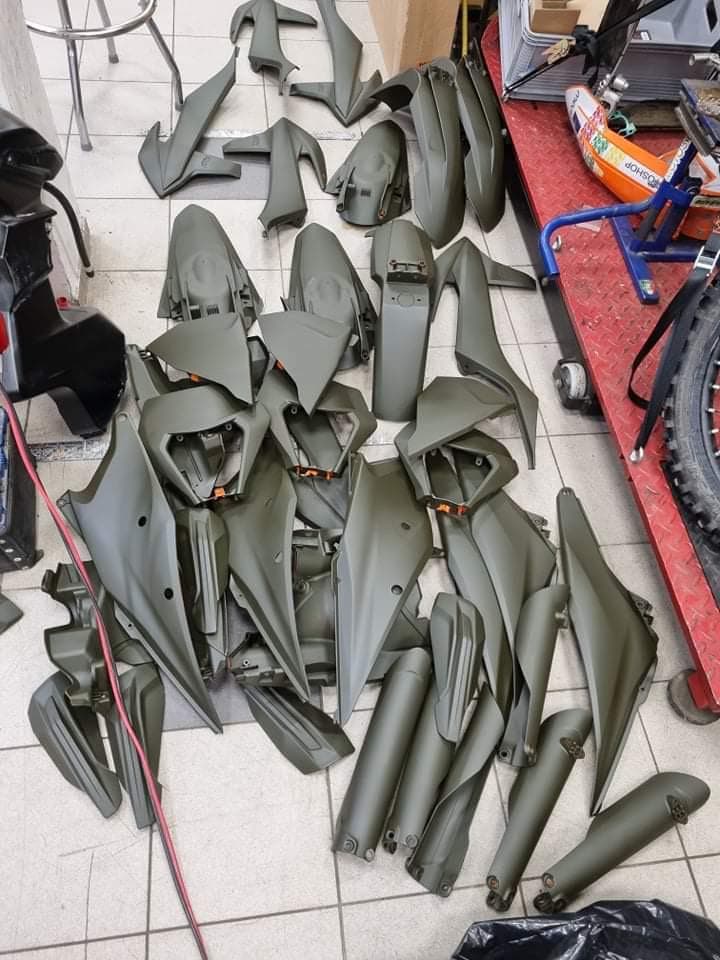 Me: “How many times have you been over?”
Motocross: “I’ve personally taken four sets of bikes over and handed them off to Ukrainian forces fighting in Kyiv and the surrounding area. We just got back taking the last load over to Mariupol area. They put them to use immediately.” [shows me photo below]

Me: “How many bikes are you taking at a time?”
Motocross: “Varies with what we’re able to assemble. Obviously they want camouflaged bikes, so it takes some time to convert them. We do a lot of other mods to the bikes too. We give it jacked up carbs, buffed tires, pretty much trick them out for war.”
Me: “How well are they received with the combat organizations.”
Motocross: “Amazing. Amazing. They put them straight to use. They don’t even really hold on to them until they can find riders. Now they’re ready for us and no sooner have we offloaded them and they ride them off into combat. It’s pretty exhilarating to see them put to immediate use. Makes us all feel like were contributing something to fight asshole Putin and his fucked up war in a very unique way that not many others could do.”

So cool. There’s a lot of bad stuff happening in this war, and you have to really look, but if you do, there are tons of people pitching in in ways you could never have imagined.

AUTHOR’S NOTES: At the time I wrote this, the guys wanted total anonymity. After some online discussions, I think they are warming up to being somewhat public. They get that this is a cool endeavor and don’t mind the status of actually pulling it off. One of them has started to post some pictures on FaceBook. I’ll link those up when he says it’s Okay. In the meanwhile, I don’t want to break his operation or get him fined or arrested for doing something I think is not just terrific for the Ukrainian war effort, but is extremely cool.